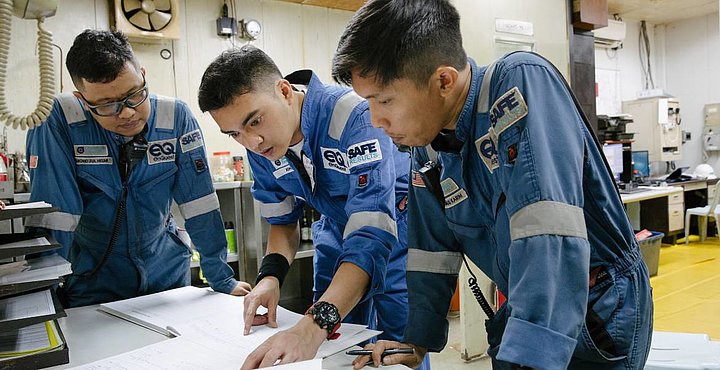 Production up c.25% year on year, driven by Magnus

EnQuest Chief Executive, Amjad Bseisu, said:
“The Group has made a good start to 2019. Production is towards the top end of our full year guidance range, our capital programme is on track and we have continued to generate strong cash flows and reduce our debt.

“FPSO performance at Kraken has improved significantly with two trains online and we continue to drive further improvements with the FPSO operator. Production from DC4 at Kraken has been better than expected and both Magnus and PM8/Seligi have performed strongly.

“Good progress is being made on our pipeline projects and preparations for drilling at Magnus and PM8/Seligi, along with our annual maintenance programmes, are underway. As such, we remain confident of achieving our Group’s 2019 production guidance of 63,000 to 70,000 Boepd.
“If the favourable oil price environment continues, we expect our net debt to EBITDA ratio to be below 2x by year end.”

Northern North Sea operations
Average production in the four months to end April 2019 of 34,766 Boepd was 75% higher than the same period in 2018. This increase was driven by the contribution from Magnus, partially offset by single compressor operations at Heather and natural declines across the Northern North Sea area.

At Magnus, production performance has remained strong with production efficiency of greater than 95% prior to the planned maintenance shutdown. The facility’s water handling capabilities have been further improved through the successful return to service of the second deaeration tower in May, with the planned shutdown also completed. At the end of 2018, the Group’s estimate of 2C resources at Magnus was around 50 MMboe, with a number of economic, drillable targets having been identified. Overall, the Group estimates there is 270 MMbbls of remaining mobile oil in place, which, alongside the potentially large historical gas discovery made by BP that is currently being evaluated, provides the opportunity for a long-term, low-cost development programme of this giant resource.

Stable production and water injection efficiency at Thistle and the Dons has delivered aggregate production in line with the Group’s plans, with the drilling team on Thistle continuing to successfully abandon wells in line with the Group’s asset life extension strategy. The Dunlin bypass project is progressing as planned with the first phase of the sub-sea construction works, including the new pipeline and structure installation, being completed on schedule. Modifications on the Thistle, Northern Producer and Magnus facilities are also progressing in readiness for the final sub-sea tie-in phase. The new export route is planned to be operational during the summer.

At Heather, production was reduced due to single compressor operations whilst upgrades took place during the period. This has been partially offset by barrel-adding well intervention work.
EnQuest has continued to achieve high plant availability and deliver safe and stable operations at the Sullom Voe Terminal.

Central North Sea operations
Average production in the four months to end April 2019 of 6,742 Boepd was 12% higher than the same period in 2018, driven by improved performance at Alma/Galia following the replacement of three Electric Submersible Pumps in 2018. Production efficiency at Alma/Galia has been over 95% in 2019, although this strong performance is offset by underlying reservoir declines. The focus remains on production optimisation and cost reduction, with preparatory decommissioning plans ongoing.

At Scolty/Crathes, wax in the flow line continues to limit production. The replacement pipeline project is progressing as planned with pipeline fabrication complete and installation underway. Production is expected to improve significantly post project completion.

High levels of production and water injection efficiency in the Greater Kittiwake Area have delivered a strong production performance in the period. Evaluation of sub-sea tie-back development options for the Eagle discovery continue. Output from Alba has been in line with expectations.

Kraken
Production efficiency has increased materially following the resumption of a two-train operation in mid-March, averaging in excess of 33,000 Bopd (gross) in March and April, up materially on the first two months of the year (c.23,000 Bopd (gross)). The performance of the main power engines has improved, leading to greater power and plant stability and enabling better performance from the topside power water pumps that supply the Hydraulic Submersible Pumps. In addition, EnQuest has been working closely with the FPSO operator, Bumi Armada, to improve the offshore spares management and FPSO maintenance processes to ensure any required maintenance activities can be undertaken in a timely manner. All DC4 wells are onstream and producing ahead of expectations and the Group remains confident in its expectations of subsurface performance. While further production efficiency improvement remains the Group’s operational priority, EnQuest continues to expect Kraken to deliver average production in line with guidance of between 30,000 Bopd and 35,000 Bopd (gross) in 2019.

Since first production, more than 17 million barrels of oil have now been produced and 35 cargoes offloaded from the FPSO, with eight of these cargoes offloaded in 2019. Cargo pricing has continued to improve.

With around 100 MMbbls of stock tank oil initially in place, the Western Flank provides a near-field, economic, development opportunity. Initial targets in the Worcestershire Area and Pembroke Trend continue to be assessed and high-graded, with potential development through spare capacity in the existing sub-sea infrastructure.

Malaysian operations
Average production in Malaysia in the four months to end April 2019 of 8,693 Boepd was 1% lower than the same period in 2018. Production has increased from PM8/Seligi as a result of high production efficiency of over 95% and better than expected performance from the Group’s idle well restoration programme, which commenced earlier than planned and has seen five wells restored to production. The Group’s planned asset rejuvenation activity is underway and progressing as scheduled. Production at Tanjong Baram has decreased reflecting natural decline.
Drilling operations are on track to commence in the third quarter, with first production from the two-well programme expected around the end of the quarter as planned.

At PM8/Seligi, where the Group has c.20 MMboe of 2P reserves and c.68 MMboe of 2C resources, a large number of low-cost drilling and workover targets have been identified and are being assessed for future development.

Liquidity and net debt
At the end of April 2019, net debt was $1,724 million, down from $1,774 million at 31 December 2018 reflecting strong operational performance and a supportive oil price more than offsetting the anticipated unwind of the c.$50 million favourable working capital position at the end of 2018. Total cash and available facilities were $231 million, including ring-fenced accounts associated with Magnus, the Oz Management facility and other joint venture accounts totalling $116 million.

The Group’s credit facility was reduced to $680 million in April. Having repaid $125 million of the required $175 million scheduled amortisation earlier than required, the final $50 million was paid as scheduled. A further $100 million repayment is due in October 2019.

2019 outlook unchanged
The Group has made a good start to the year with average production of 69,973 Boepd towards the top end of the full year guidance range. The planned maintenance shutdown at Magnus was completed in May, with the remaining programmes at the Group’s other fields expected to be executed by around the end of the third quarter. As such, the Group continues to expect 2019 production to grow by around 20% to between 63,000 and 70,000 Boepd.

Expectations for 2019 capital expenditure remain around $275 million. All three DC4 wells at Kraken are now onstream. The Scolty/Crathes and Dunlin bypass pipeline projects are on track for completion as planned, while the drilling programmes at Magnus and PM8/Seligi are on schedule to commence later this year.

The Group continues to prioritise debt repayment with an ongoing focus on cost control and capital discipline. At the end of 2019, the Group expects overall net debt to EBITDA to be below 2x if recent oil prices continue, with the Group intending to operate between 1x and 2x in the future.

EnQuest PLC trades on both the London Stock Exchange and the NASDAQ OMX Stockholm. Its UK operated assets include Thistle/Deveron, Heather/Broom, the Dons area, Magnus, the Greater Kittiwake Area, Scolty/Crathes Alma/Galia, Kraken and the Sullom Voe Terminal; EnQuest also has an interest in the non-operated Alba oil field. At the end of December 2018, EnQuest had interests in 18 UK production licences and was the operator of 16 of these licences. EnQuest’s interests in Malaysia include the PM8/Seligi Production Sharing Contract and the Tanjong Baram Risk Services Contract, both of which the Group operates.