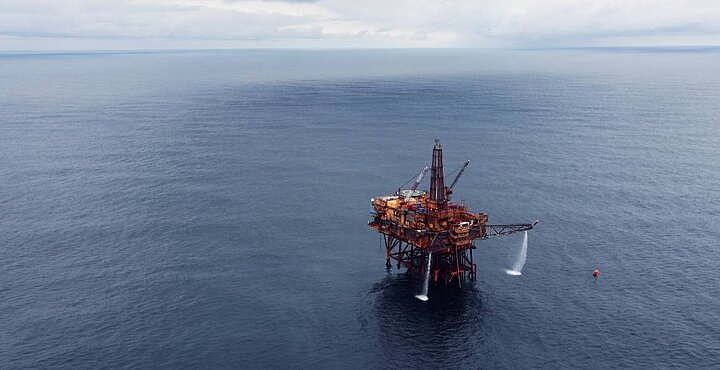 EnQuest Chief Executive, Amjad Bseisu, said:
“In 2018, the Group met its financial and operational targets. Production increased by 48%, just above the midpoint of our guidance, which, along with strong cost control, drove a significant improvement in cash generation allowing the Group to reduce net debt.

“FPSO performance has been the main limiting factor in achieving Kraken’s full production potential. As such, our clear operational priority is to improve Kraken’s FPSO uptime and efficiency. We are working with the FPSO operator on a number of improvement initiatives.

“We are committed to further reducing our debt, and expect our net debt to EBITDA ratio to trend towards 2x this year and intend to operate within our 1-2x target in the future.

“The acquisition of Magnus has added material value to the business through significant production and reserve growth, and the application of our production enhancing capabilities are already improving performance above original expectations.

“In the near term, we remain focused on investing in short-cycle projects which maximise cash flow and allow us to deliver on our plans to reduce our debt. We have opportunities for low-cost material growth in near-field, short-cycle infill and tie-back investments, particularly at Magnus, PM8/Seligi and Kraken.

“Longer term, our capital allocation will balance investment to develop our asset base, returns to shareholders and the acquisition of suitable growth opportunities.”

Notes:
1 Including losses of $93.0 million (2017: losses of $20.6 million) associated with EnQuest’s oil price hedges
2 EBITDA is calculated on a Business performance basis, and is calculated by taking profit/loss from operations before tax and finance income/(costs) and adding back depletion, depreciation, foreign exchange movements, inventory revaluation and the realised gains/loss on foreign currency derivatives related to capital expenditure
3 2017 reported earnings per share has been restated for the bonus element of the rights issue
4 Net (debt)/cash represents cash and cash equivalents less borrowings, stated excluding accrued interest and the net-off of unamortised fees

2018 performance summary
During 2018, the Group was focused on meeting its financial and operational targets and facilitating debt reduction. The successful acquisition of Magnus, the Sullom Voe Terminal and related infrastructure assets from BP was a great testament to our people’s focus on delivery and excellent team collaboration. The Group’s collective efforts delivered a set of assets with a strong strategic fit into the portfolio. EnQuest’s cash generation capability has improved through the acquisition of Magnus in particular and the Group is well positioned to meet its debt repayment schedule and capital programme in 2019 and beyond.

In line with the Group’s guidance, EnQuest’s average production increased by 48.2% to 55,447 Boepd, primarily reflecting the contributions from Kraken and Magnus, a better than expected performance at Heather, Alma/Galia and Scolty/Crathes, partially offset by natural declines.

The combination of significantly higher production, higher realised prices and the Group’s focus on cost control resulted in EBITDA and cash generated by operations more than doubling in 2018 compared to 2017, reaching $716.3 million and $788.6 million, respectively.

As expected, cash capital expenditure of $220.2 million was materially lower than 2017. The majority of the expenditure was at Kraken, although the delayed arrival of the Transocean drilling rig resulted in the DC4 drilling programme and associated costs being phased into 2019, with the remaining spend largely reflecting drilling activities at Heather/Broom and PM8/Seligi.

Liquidity and net debt
During the year, EnQuest continued to manage its liquidity position actively and ensuring the Group is able to deploy capital and resources to those key projects which maximise cash flow to facilitate debt reduction.

In January, the Group agreed to receive $30.0 million in cash from BP in exchange for undertaking the management of the physical decommissioning of the Thistle and Deveron fields and making payments by reference to 4.5% of BP’s decommissioning costs of these fields when spend commences. Following shareholder approval at the General Meeting held in October, EnQuest received a further $20.0 million in cash in exchange for increasing its total payment obligation of BP's decommissioning costs of the Thistle and Deveron fields by 3.0% to 7.5%.

In February, the Group completed the $37.25 million refinancing agreement in relation to its Tanjong Baram project, providing approximately $25.0 million in additional liquidity.

In September, the Group agreed $175 million of financing with funds managed by Oz Management. The financing is ring-fenced on a 15% interest in the Kraken oil field and will be repaid out of the cash flows associated with the 15% ring-fenced interest over a maximum of five years.

In October, following shareholder approval at the General Meeting, net proceeds of around $128.9 million were raised through a rights issue in which the Group received valid acceptances in respect of 95.5% of the total number of new ordinary shares offered pursuant to the rights issue. $100.0 million of the proceeds were used to fund EnQuest's share of the consideration in relation to acquiring the remaining 75% interest in Magnus and additional interests in the Sullom Voe Terminal and associated infrastructure. The balance will be used to fund a two-well infill drilling programme in 2019.

During the year, the Group’s improved cash generation and the Kraken financing agreement facilitated the cancellation and repayment of $340.0 million of the Group’s credit facility.
At the end of the year, net debt was reduced by 10.9% to $1,774.5 million, with total cash and available facilities of $309.0 million, including ring-fenced accounts associated with Magnus, the Oz Management facility and other joint venture accounts totalling $107.3 million.

2019 performance and additional outlook details
At Magnus, performance has remained strong through the first two months of the year. FPSO performance has continued to limit production performance at Kraken. All DC4 wells are now onstream and, as FPSO maintenance activities are completed, production is expected to significantly improve. We continue to expect to deliver gross production of between 30,000 and 35,000 Bopd from Kraken. Elsewhere across the portfolio, aggregate production has been broadly in line with the Group’s expectations.

2019 production is expected to grow by around 20% to between 63,000 and 70,000 Boepd, primarily driven by Magnus. Production from DC4 at Kraken, where all three wells are now onstream, and the anticipated improvement in performance at Scolty/Crathes following the installation of the replacement pipeline scheduled for the third quarter of 2019 are expected to offset natural declines elsewhere across the portfolio.

The successful delivery of the capital programme, which includes drilling at Kraken, Magnus and PM8/Seligi combined with project-related expenditures at Scolty/Crathes and Thistle/Deveron and the Dons, will underpin production during 2019 and beyond.

Debt repayment remains the priority for the Group, and will be enabled through its improved cash-generation capability combined with its focus on cost control and capital discipline. In March, the Group reduced its credit facility by $55.0 million to $730.0 million, ahead of the scheduled amortisation due in April, which now has a balance due of $50.0 million. At the end of 2019, the Group expects overall net debt to EBITDA to be approaching 2x, with the Group intending to operate between 1x and 2x in the future.

Revenue and other operating income for 2018 was $1,201.0 million, 89.1% higher than 2017 ($635.2 million). This increase reflects the material increase in volumes and higher realised prices, partially offset by realised losses of $93.0 million associated with the Group’s commodity hedge programme (2017: losses of $20.6 million), which reflected the timing at which the hedges were entered into and the increase in market prices during the first half of 2018 in particular. The Group’s blended average realised oil price was $61.2/bbl in 2018, compared to $52.2/bbl during 2017. Excluding this hedging impact, the average realised oil price was $66.2/bbl in 2018, 22.8% higher than 2017 ($53.9/bbl), reflecting higher market prices. Revenue is predominantly derived from crude oil sales which totalled $1,237.6 million, 94.3% higher than 2017 ($637.0 million), reflecting the material increase in volumes and higher realised prices. Revenue from the sale of condensate and gas was $43.1 million (2017: $2.8 million) as a result of increased gas sales from Magnus, which includes the combination of produced gas sales and the onward sale of third-party gas purchases not required for injection activities, for which the costs are included in other cost of sales.

Other cost of sales increased by $35.4 million to $48.1 million compared to 2017 ($12.7 million), principally reflecting the cost of additional Magnus related third-party gas purchases not required for injection activities.

Other net income of $19.1 million (2017: net expense of $17.6 million) primarily comprise net foreign exchange gains as a result of revaluing Sterling-denominated amounts on the balance sheet following the weakening of Sterling against the US Dollar.

The tax credit for 2018 of $20.9 million (2017: $66.0 million tax credit), excluding exceptional items, is due predominantly to the Ring Fence Expenditure Supplement on UK activities.

Post-tax exceptional items for 2018 were a gain of $49.1 million (2017: losses of $27.3 million). The gain in 2018 primarily reflects the non-cash increase in fair value of $74.3 million recognised under step acquisition accounting on the initial interests in the assets acquired from BP in December 2017 following completion of the acquisition of additional interests in these assets in December 2018. Post-tax non-cash impairments of oil and gas assets of $78.7 million were largely offset by post-tax unrealised gains on commodity contracts of $59.9 million.

Notes to editors
This announcement has been determined to contain inside information.

EnQuest PLC trades on both the London Stock Exchange and the NASDAQ OMX Stockholm. Its UK operated assets include Thistle/Deveron, Heather/Broom, the Dons area, Magnus, the Greater Kittiwake Area, Scolty/Crathes Alma/Galia and Kraken; EnQuest also has an interest in the non-operated Alba producing oil field. At the end of December 2018, EnQuest had interests in 18 UK production licences and was the operator of 16 of these licences. EnQuest’s interests in Malaysia include the PM8/Seligi Production Sharing Contract and the Tanjong Baram Risk Services Contract, both of which the Group operates.