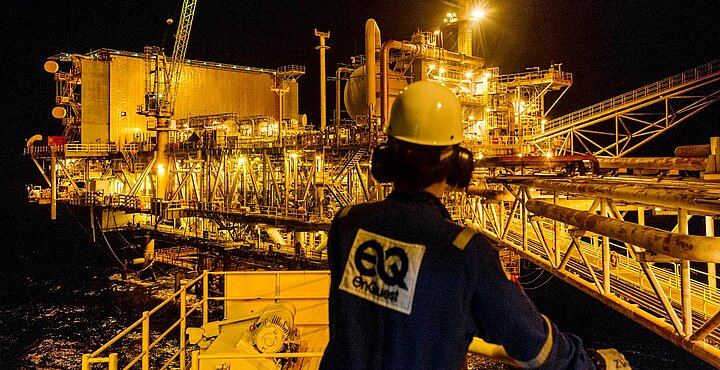 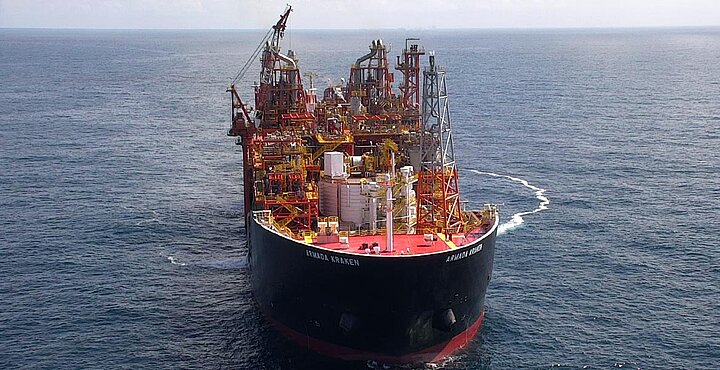 EnQuest Chief Executive, Amjad Bseisu, said:
“2017 was a transformational year for EnQuest. The Group delivered the complex Kraken project on schedule and expects full cycle gross capital expenditure to be significantly below budget, while the acquisition of the Magnus oil field and Sullom Voe Oil Terminal is aligned with the Group’s asset life extension capabilities and provides further opportunities for synergies and growth.

“Production performance in January and February was strong and the Group expects a material increase in production in 2018. This growth, combined with a focus on cost control and a substantially reduced cash capital expenditure programme, should see the Group generate increased cash flow, enabling it to manage its liquidity and reduce debt.

“Beyond 2018, the Group has significant potential within the existing portfolio, in particular at Magnus and PM8/Seligi, but also with potential future developments at Kraken, positioning EnQuest to deliver long-term sustainable growth.”

**EBITDA is calculated on a business performance basis, and is calculated by taking profit/loss from operations before tax and finance income/(costs) and adding back depletion, depreciation, foreign exchange movements and the realised gains/loss on foreign currency derivatives related to capital expenditure. *** Including losses of $20.6 million (2016: revenue of $255.8 million) associated with EnQuest’s oil price hedges. ****Cash capex is stated net of proceeds received from the disposal of tangible and intangible fixed assets of $nil (2016: $1.5 million). ***** Net (debt)/cash represents cash and cash equivalents less borrowings, stated excluding accrued interest and the net-off of unamortised fees.

2017 performance summary
The Group’s focus during the year was to deliver the Kraken development, complete the acquisition of assets from BP and position the Group for profitable growth as it transitions from a period of heavy investment to one in which the Group can begin to reduce its debt. First oil from the Kraken project, one of the largest developments in the North Sea in the last ten years, was delivered on schedule, with full cycle gross capital expenditure expected to be significantly below budget. EnQuest completed the acquisition of initial interests in Magnus, the Sullom Voe Oil Terminal and associated infrastructure in December.

Production for the year was lower than originally expected at 37,405 Boepd, impacted by Electrical Submersible Pump performance at Alma/Galia and lower contributions from the Scolty/Crathes and Kraken developments.

The Group’s focus on cost control and management of commercial agreements resulted in lower operating expenditures of $349.3 million, with unit opex of $25.6/boe. However, lower realised prices, reflecting the forward prices available at the time at which the commodity hedge programme was implemented, combined with lower production reduced EnQuest’s revenue, EBITDA and cash generated by operations.

As expected, cash capital expenditure of $367.6 million was materially lower than 2016. The majority of the expenditure was at Kraken, with the remaining spend largely reflecting the settlement of deferred invoices in respect of the Alma/Galia and Scolty/Crathes developments and the Eagle discovery. Excellent drilling performance at Kraken has delivered the first three drill centres (‘DC’s) significantly ahead of schedule, which, along with lower market rates for the remaining subsea campaign, resulted in a reduction of approximately $100 million in the expected full life gross project capital expenditure estimate.

Liquidity and net debt
EnQuest’s lending banks continued their support of the Group and agreed to relax the Company’s covenants and to amend the amortisation schedule of its Term Loan and Revolving Credit Facility. EnQuest also agreed an $80 million oil prepayment transaction and execution of a $37.25 million refinancing agreement in relation to its Tanjong Baram project. EnQuest finished the year with net debt of $1,991.4 million, with cash and available bank facilities of
$244.4 million, excluding $26.5 million of cash from the ring fenced working capital facility associated with SVT.

Reserves
Net 2P reserves at the end of 2017 were 210 MMboe, (2016: 215 MMboe) representing a reserve life of 17 years. The slight reduction in reserves was driven by some changes in long-term assumptions combined with lower production performance in the North Sea, largely offset by the benefit of the acquisition of an initial 25% equity interest in Magnus and better production performance in Malaysia.

2018 performance and additional outlook details
Production performance in the first two months of 2018 was strong across the portfolio, with Kraken gross average production around 38,000 Bopd in this period. Extreme cold weather in early March resulted in brief shutdowns at a number of the Group’s North Sea fields. While Kraken was shut down, the Group has undertaken much of the workscope previously scheduled for the planned shutdown in April and, as a result, this planned shutdown is no longer required. The Group continues to have planned maintenance shutdowns at a number of the Group’s fields, including Kraken, in the third quarter. The drilling programmes at Magnus and PM8/Seligi, along with the workover programme at Alma/Galia are expected to deliver production improvements later in the year, with the DC4 programme at Kraken expected to come into production in 2019. The Group expects material net production growth in 2018 to within the guidance range of c.50,000 to 58,000 Boepd.

The Group continues to expect unit operating expenditures of approximately $24/Boe, including the impact of planned workovers at Alma/Galia, while the depletion and depreciation charge is anticipated to be around $22/Boe, reflecting the impact of a full year’s contribution from Kraken.
2017 general and administration costs reflect the Group’s ongoing efforts to reduce costs across the organisation. 2018 costs are expected to be in the ‘single digit’ millions.

Cash capital expenditure is still expected to be around $250 million, largely reflecting the drilling programmes at Kraken, Heather and PM8/Seligi. The renegotiation of the drilling rig contract with Transocean, reducing both the contract duration and day rate, has resulted in net cash capital expenditure savings of c.$60 million in 2019. Kraken full cycle gross project capital expenditure is now expected to be c.$2.3 billion, more than 25% lower than originally sanctioned.
EnQuest continues to take prudent measures to improve its liquidity position. In January, EnQuest received $30 million in cash in exchange for agreeing to undertake the management of the physical decommissioning at Thistle and Deveron and being liable to make payments to BP by reference to 3.7% of the gross decommissioning costs of these assets. The Group has an outstanding option, exercisable over a 12 month period, to receive a further $20 million in cash in exchange for making additional payments by reference to 2.4% of the gross decommissioning costs of these fields. In February, the Group completed the $37.25 million refinancing agreement in relation to its Tanjong Baram project, providing approximately $25 million in additional liquidity.

Summary financial review of 2017
(all figures quoted are in US Dollars and relate to Business performance unless otherwise stated)
Total revenue for 2017 was $635.2 million, 25.2% lower than 2016 ($849.6 million). This reduction was largely as a result of lower realised prices, which reflected the forward prices available at the time at which the commodity hedge programme was implemented. The commodity hedge programme resulted in realised losses of $20.6 million in 2017 compared to realised gains of $255.8 million in 2016. As a result, the Group’s blended average realised oil price was $52.2/bbl in 2017, compared to $63.8/bbl during 2016. Excluding this hedging impact, the average realised oil price was $53.9/bbl in 2017, 21.8% higher than 2016 ($44.3/bbl), reflecting higher market prices. Revenue is predominantly derived from crude oil sales which totalled $637.0 million for 2017, 10.2% higher than 2016 ($577.8 million). This increase in crude oil revenue reflected a higher market oil price, partially offset by lower production.

Operating expenditures of $349.3 million were 2.3% lower than 2016 ($357.4 million), reflecting the Group’s focus on cost control and management of commercial agreements and includes net lease charter payment credits of $19.5 million arising from the non-availability of the Kraken FPSO and the absence of the 2016 loss on operating expense foreign exchange derivatives, partially offset by a full year of operations at Scolty/Crathes, which came onstream in November 2016. The Group’s average unit operating cost for 2017 was $25.6/Boe, 4.0% higher than 2016 ($24.6/Boe) primarily as a result of the 5.9% reduction in production.

At 31 December 2017, the Group had moved to a net underlift position compared to the prior year end net overlift position, resulting in a $20.4 million credit to cost of sales (2016: charge of $2.8 million).

The tax credit for 2017 of $66.0 million (2016: $5.2 million tax credit), excluding exceptional items, is due predominantly to the Ring Fence Expenditure Supplement on UK activities.
Exceptional items resulting in a net post-tax loss of $27.3 million have been disclosed separately for 2017 (2016: profit of $63.7 million). These largely reflect tangible oil and gas non-cash impairments of $107.2 million, primarily arising from some changes in assumptions combined with lower production performance in the North Sea, partially offset by the recognition of accounting for the excess of fair value over consideration of $48.7 million associated with the acquisition of initial interests in assets from BP.

This announcement has been determined to contain inside information.

ENQUEST
EnQuest is one of the largest UK independent producers in the UK North Sea. EnQuest PLC trades on both the London Stock Exchange and the NASDAQ OMX Stockholm. Its operated assets include Thistle/Deveron, Heather/ Broom, the Dons area, Magnus, the Greater Kittiwake Area, Scolty/Crathes Alma/Galia and Kraken; EnQuest also has an interest in the non-operated Alba producing oil field. At the end of December 2017, EnQuest had interests in 25 UK production licences and was the operator of 23 of these licences.

EnQuest believes that the UKCS represents a significant hydrocarbon basin, which continues to benefit from an extensive installed infrastructure base and skilled labour. EnQuest believes that its assets offer material organic growth opportunities, driven by exploitation of current infrastructure on the UKCS and the development of low risk near field opportunities.
EnQuest is replicating its model in the UKCS by targeting previously underdeveloped assets in a small number of other maturing regions; complementing its operations and utilising its deep skills in the UK North Sea. In which context, EnQuest has interests in Malaysia where its operated assets include the PM8/Seligi Production Sharing Contract and the Tanjong Baram Risk Services Contract.