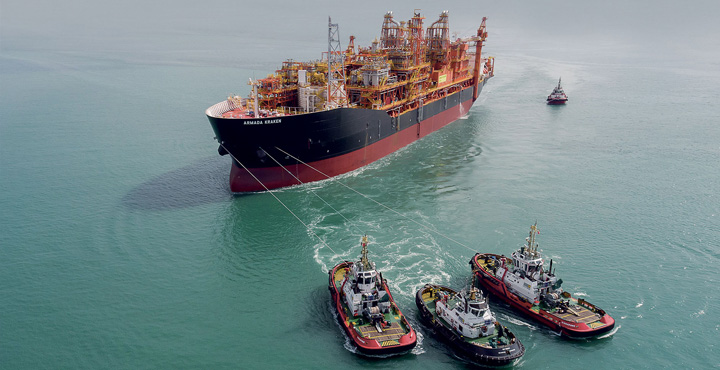 Unless otherwise stated, all figures are on a Business performance basis and are in US Dollars.

1 Excludes interest capitalised as payment in kind of $15.8 million

“During 2019, EnQuest again delivered on its targets. The combination of improved Kraken performance, a full year contribution at Magnus and strong performances at Scolty/Crathes and PM8/Seligi, drove significant production growth and free cash flow generation, which facilitated a material reduction in the Group’s net debt.

“Given the prevailing low oil price environment, we have taken decisive action to lower our cost base, targeting $190 million of operating cost savings in 2020, equating to unit operating expenses of c.$15/Boe. With these significant cost reductions, cash flow breakeven is estimated at c.$33/Boe in 2020. With realisations in the first quarter of 2020, the cash flow breakeven falls to c.$25/bbl for the remainder of the year. 2021 cash flow breakeven is now forecast at c.$27/Boe, with unit operating expense of around $12/Boe. With these significant reductions, we are well positioned to manage through a sustained low oil price environment.

“Our three largest assets continue to generate meaningful operating cash flows, even at low oil prices, and, in the medium to long-term, offer low-cost resource maturation opportunities which are aligned with our proven differential capabilities.”

EnQuest’s operational focus for 2019 was to improve and stabilise production at Kraken, deliver the Group’s sub-sea pipeline projects and drilling programmes, while maintaining strong production efficiency across its asset base. All of these were achieved with the Group again performing better than, or in line, with external guidance. This operational delivery combined with ongoing cost control, has enabled the Group to continue to strengthen the balance sheet by significantly reducing net debt.

EnQuest’s average production increased by 23.7% to 68,606 Boepd, towards the top end of the guidance range, primarily reflecting the contributions from Magnus, Kraken, Scolty/Crathes and PM8/Seligi, partially offset by the shutdowns at Thistle and Heather and natural declines across the portfolio.

Cash capital expenditure of $237.5 million was focused on executing the Group’s drilling programmes at Kraken, Magnus and PM8/Seligi and the sub-sea pipeline projects at Scolty/Crathes and the Dunlin bypass for Thistle and the Dons.

Strong free cash flow generation enabled the Group to make early voluntary repayments of the senior credit facility, which was reduced by $325.0 million during the year, including $120.0 million associated with the April 2020 scheduled amortisation. A further $35.0 million was repaid in January 2020 as an accelerated voluntary payment of the October 2020 amortisation. No further amortisation payments are due in 2020. At the end of March, the senior credit facility, excluding payment in kind interest, totalled $425.0 million

Net 2P reserves at the end of 2019 were 213 MMboe (2018: 245 MMboe) and have been audited on a consistent basis with prior years. During the year, the Group produced 9.6% of its year-end 2018 2P reserves base, with downward revisions at Heather/Broom and Thistle almost entirely offset by increases at Magnus, Kraken and PM8/Seligi. Net 2C resources at the end of 2019 were 173 MMboe (2018: 198 MMboe) as a result of transfers to 2P reserves at Magnus and PM8/Seligi and revisions at Heather/Broom, partially offset by the addition of resources associated with the award of the PM409 Production Sharing Contract in Malaysia.

The Group is materially better placed to deal with the reduced oil price than historically with a much reduced level of debt and no payments of the Group’s senior credit facility due in 2020. In addition, the Group is taking decisive action to further reduce operating and capital expenditure in 2020 and beyond, with a view to targeting cash flow breakeven of c.$33/Boe in 2020 and c.$27/Boe in 2021.

EnQuest’s updated working assumption is not to re-start production at the Heather and Thistle/Deveron fields. As a result, full year production guidance is expected to be in the range of 57,000 to 63,000 Boepd, with forecast Kraken gross production remaining unchanged between 30,000 and 35,000 Bopd. The two-well drilling programme in Kraken’s western area is underway and expected to contribute production in the second half of the year, partially offsetting the impacts of the planned maintenance shutdown and natural declines. As previously announced, the Group’s current expectation is for economic production at Alma/Galia to cease in the second half of 2020.

While no further repayments of the Group’s senior credit facility are due in 2020, debt repayment remains the financial priority for the Group.

As a responsible operator, EnQuest has been monitoring the evolving situation, and consequent emerging risk, with regards to the spread of COVID-19. The Group has been working with a variety of stakeholders, including industry and medical organisations, to ensure its operational response and advice to its workforce is appropriate and commensurate with the prevailing expert advice and level of risk. Appropriate restrictions on offshore travel have been implemented, such as self-declaration by, and isolation of, individuals who have been to affected areas and pre-mobilisation temperature checking in operation at most locations. EnQuest’s normal communicable disease process has been updated specifically in respect of COVID-19, with additional offshore isolation capability and agreements in place to transport impacted individuals back onshore in dedicated helicopters. At the Sullom Voe Terminal, the same processes have also been implemented, with isolation capability at the local accommodation block. Non-essential down-manning has been implemented, with many of the Group’s onshore workforce working remotely.

While it is difficult to forecast the impact of COVID-19, at the time of publication of EnQuest’s full year results, the Group’s day-to-day operations continue without being materially affected. The situation will continue to be monitored.

Revenue for 2019 was $1,711.8 million, 42.5% higher than in 2018 ($1,201.0 million), reflecting the increase in production, the onward sale of third-party gas purchases not required for injection activities at Magnus, and the favourable impact of the Group’s commodity hedge programme, offset by slightly lower market prices. The Group’s commodity hedge programme resulted in realised gains of $24.8 million in 2019 (2018: losses of $93.0 million).

Revenue is predominantly derived from crude oil sales which totalled $1,548.2 million, 25.1% higher than in 2018 ($1,237.6 million), reflecting the increase in volumes. Revenue from the sale of condensate and gas was $120.2 million (2018: $43.1 million), mainly reflecting gas sales from Magnus, which includes the combination of produced gas sales and the onward sale of third-party gas purchases not required for injection activities, for which the costs are included in other cost of sales.

Other cost of sales of $97.5 million were higher than in 2018 ($48.1 million), principally reflecting the cost of additional Magnus related third-party gas purchases not required for injection activities of $72.0 million.

The tax charge for 2019 of $23.6 million (2017: $20.9 million tax credit), excluding exceptional items, is mainly due to Malaysian tax and the utilisation of UK losses offset by the Ring Fence Expenditure Supplement on UK activities generated in the year. UK corporate tax losses at the end of the year reduced to $2,903.4 million (2018: $3,225.3 million) as the Group generated taxable profits on increased production which were offset against existing tax losses.

Post-tax exceptional items for 2019 were a loss of $663.6 million (2018: gains of $49.1 million). The Group recognised pre-tax non-cash impairment charges on its tangible oil and gas assets of $637.5 million (2018: $126.0 million), mainly in respect of Heather, Thistle and the Dons, $149.6 million (2018: $nil) on goodwill and $25.4 million (2018: $0.4 million) on intangible oil and gas assets. In addition, a non-cash increase in fair value of contingent consideration relating to the Magnus asset of $15.5 million, non-cash other finance costs relating to the unwinding of contingent consideration of $57.2 million and unrealised losses on commodity contracts of $65.4 million. A tax credit of $303.5 million (2018: $12.4 million) has been presented as exceptional, representing the tax impact of the above items.

Presentation to Analysts and Investors

A presentation to analysts and investors will be held at 09:00 today – London time. The presentation will be accessible via an audio webcast, available on the investor relations section of the EnQuest website at www.enquest.com. A conference call facility will also be available at 09:00 on the following numbers:

This announcement has been determined to contain inside information. The person responsible for the release of this announcement is Stefan Ricketts, General Counsel and Company Secretary.

EnQuest is an independent production and development company with operations in the UK North Sea and Malaysia. The Group’s strategic vision is to be the operator of choice for maturing and underdeveloped hydrocarbon assets, by focusing on operational excellence, differential capability, value enhancement and financial discipline.

EnQuest PLC trades on both the London Stock Exchange and the NASDAQ OMX Stockholm. Its UK operated assets include Thistle/Deveron, Heather/Broom, the Dons area, Magnus, the Greater Kittiwake Area, Scolty/Crathes Alma/Galia and Kraken; EnQuest also has an interest in the non-operated Alba producing oil field. At the end of December 2019, EnQuest had interests in 17 UK production licences and was the operator of 15 of these licences. EnQuest’s interests in Malaysia include the PM8/Seligi and PM409 Production Sharing Contracts, both of which the Group operates.

Forward-looking statements: This announcement may contain certain forward-looking statements with respect to EnQuest’s expectations and plans, strategy, management’s objectives, future performance, production, reserves, costs, revenues and other trend information. These statements and forecasts involve risk and uncertainty because they relate to events and depend upon circumstances that may occur in the future. There are a number of factors which could cause actual results or developments to differ materially from those expressed or implied by these forward-looking statements and forecasts. The statements have been made with reference to forecast price changes, economic conditions and the current regulatory environment. Nothing in this announcement should be construed as a profit forecast. Past share price performance cannot be relied upon as a guide to future performance.